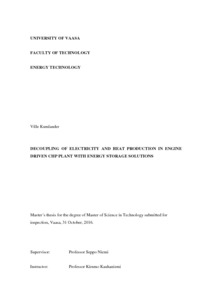 An engine driven CHP plant offers a high efficiency choice for district heating applications and electricity production. The plant is able to start and stop within minutes so it operates well in a system with increasing share of renewables. Heat production utilizes engine cooling and exhaust gases so it does not have an effect on electricity production. Flexibility enables the plant to run during high electricity prices and to be idle during low: a heat storage is able to meet heat demand during unprofitable times.

The aim of this thesis was to study possibilities for decoupling of heat and electricity production in an engine driven CHP plant with energy storage solutions. A Simulink model was constructed to simulate the operation of a plant which consisted of one Wärtsilä 20V34SG gas engine and an energy storage. A steel tank and a lithium-ion battery was studied in the theory part of the thesis.

The simulation part of the thesis was divided into electric and heat modes. The electric mode simulated a lithium-ion battery in case of smoothing fluctuations in electricity demand. The engine was run with a fixed power output throughout the simulation. Four fixed outputs of 7.5, 8.0, 8.5 and 9.0 MW were selected and the battery capacity was scaled for every power output. The power output of 8.5 MW offered the smallest battery capacity. As a result, smoothing of electricity demand with an electric battery was rather expensive, not to mention to decouple the whole production.