Realism and Otherness in the Science Fiction Film District 9 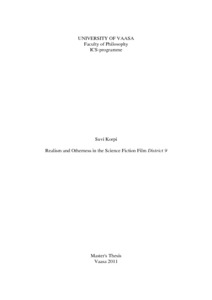 Previous research of the field shows that science fiction has not been granted the prestige of realistic fiction. Even though its extraterrestrial aliens have been connected to the study of otherness, their connection to reality in an allegorical way has been denied. This M.A. thesis set off from the hypothesis that science fiction today is capable to represent reality allegorically and as such it is capable of examining otherness in a realistic manner. The previous studies of the science fiction genre and otherness were used as a basis for the case study.

The study revealed the existence of an undeniable realistic allegorical link between the subject film's diegetic world and the empirical world. The realisation of this allegory was built on the science fictional novum and it was based on transrealism. The allegory of the subject film refers to the history of apartheid in South Africa. Otherness as a theme in the film has been based on this allegorical link to apartheid. In this allegory, the science fictional aliens represent the black population of South Africa during the apartheid.