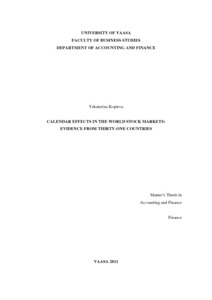 Capital market efficiency has been a popular topic for teaching and empirical research since Fama (1965, 1970) described the theoretical analysis of market efficiency (Efficient Market Hypothesis). More recently, however researchers have demonstrated market inefficiency by identifying systematic variations in stock returns. Among the most important systematic variations or anomalies are calendar effects. The existence of calendar or time anomalies is a contradiction to the weak form of the Efficient Market Hypothesis and suggests market inefficiency.

The present paper adopts and carefully applies a procedure which examines three main calendar effects in thirty-one developed and developing countries: the January/turn-of-the-year effect, the turn-of-the-month-effect and the day-of-the-week effect. The anomalies are tested with GARCH (1,1) model using the methodology proposed by Szakmary and Kiefer (2004). The research shows that the turn-of-the-year effect is not found in observed countries, except one, which means that the effect has totally disappeared during the recent years in these countries (consistent with Giovanis (2009) for some of the examined countries). The turn-of-the-month and the day-of-the-week anomalies still exist in the majority of the analyzed stock markets. In all countries where it is found, the returns during the turn of the month are significantly positive at 1% level. The day-of-the-week effect provides some variations across countries. Results of this study suggest that the disappearance of calendar effects with time leads to the increase in market efficiency.