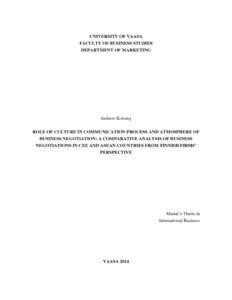 The theoretical framework of this study consists of specific cultural and strategic factors that determine the final nature of the atmosphere and the communication process. This study applies a qualitative research method with a multiple-case study research strategy. Two Finnish firms were chosen as case companies, and the empirical data was collected by conducting semi-structured interviews with Finnish high-level managers who were involved in Czech or Malaysian business negotiations.

The findings of this study demonstrate there are in fact more similarities between Czech and Malaysian negotiators than proposed in the theory. The nature of the atmosphere and the communication are affected by particular cultural and strategic factors relevant for each of the countries. On the side of Czech negotiators, a corporate culture and mix of two cultures play a role of major determinants. Malaysian negotiations were observed more heterogeneous, mainly due to existence of various ethnic and religious groups, a change in a Malaysian society towards Western values, and other factors that appeared to be culturally or strategically related.