Value Co-Creation and Co-Destruction in Online Video Games : An Exploratory Study and Implications for Future Research 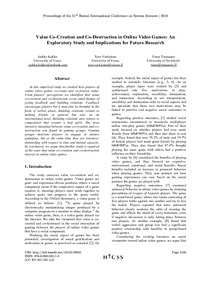 In this empirical study we studied how players of online video games co-create and co-destroy value. From players perceptions we identified that value co-creation and co-destruction occur amid themes of giving feedback and building relations. Feedback encourages players but it may also be harmful in the form of verbal abuse. Building relations relates to making friends in general but also on an international level. Building relations also relates to competition that creates a bad spirit. The most intensive interplay between value co-creation and codestruction was found in gaming groups. Gaming groups motivate players to engage in intense gameplay, but at the same time they are resourcedemanding with respect to time and mental capacity. In conclusion, we argue that further study is required of the ways that value co-creation and co-destruction interact in online video games.