WIND POWER BUSINESS IN THE MIDDLE EAST AND NORTH AFRICA 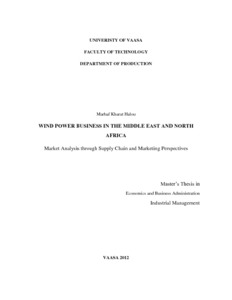 Energy is an essential feature that enables the social-economic development and economic growth for any nation, which explains why renewable energy, like wind power, became an increasingly significant part of many countries‟ strategies to achieve reductions in greenhouse emissions. In addition, it is a major factor to reduce the dependency on fossil fuels. However, threats of global warming, acid rain, and nuclear accidents have shown the need to transform existing global energy into focus, especially with the growing demand for energy.
For several decades, nations have made plans to reduce their economies‟ dependency on fossil fuels by substituting them with alternative energy resources such as renewable energy sources in order to sustain their economic growth. On the one hand, the Middle East and North Africa are rich in oil and natural gas, but the fact that oil and natural gas reserves are unevenly distributed, divides the regions‟ countries to major oil exporters and others as importers.
On the other hand, the increasing population in those regions put an extra demand on the power sector, which has been growing rapidly. All the previous challenges encouraged a number of governments in the region to think about alternative power resources and to start developing a national plan for renewable energy. The aim of this study is to identify the status of wind power productivity and development issues in the Middle East and North Africa and its futuristic development scope. The analysis process will investigate deeply the wind resources, the policy environment of renewable energy, existing wind farms, markets development, wind power industry and the futuristic plans.