Language Planning for Adult Immigrant Integration: Critical Perspectives on Challenges for and Motivations of Immigrant Second Language Learners in Finland 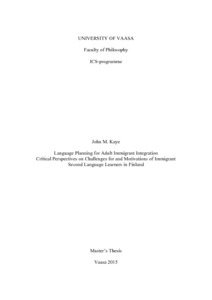 Finland has experienced a notable rise in immigration over the past decades while also since 2000 the reasons for relocation have diversified. Generally, local language learning is seen as a critical factor in the integration of foreign language speaking immigrant populations in their host societies. Language planners in Finland place education in the local language as a priority in efforts to support and advance integration. However, the Finnish language garners comparatively little attention on the international stage and learning Finnish can present challenges for second language migrant learners. Despite programming and financial support for adult immigrant learners, insufficient language skills continue to be a barrier to integration.

This thesis research aims to identify motivators and challenges of adult immigrant learners of the Finnish language in the Helsinki region through the lens of critical language planning. Opportunities to study and use Finnish language are discussed taking into account critical perspectives on traditional language planning, such as discrimination based on one’s ethnicity, gender or economic situation as well as the presence of a prominent language of wider communication. The informants are Finnish language learners, non-EU adult immigrants to Finland who have been residents for 4-15 years. They participate in narrative interviews that are analyzed and discussed on the backdrop of language planning for migrants in Finland. Participants’ accounts of their learning goals, motives and process, communicative experiences, and the role of English in Finland are examined along with the role of L2 learning in integration.

The interview analyses indicate that skills in English in the absence of Finnish aptitude can be sufficient for economic and social integration in certain cases, while remaining a limiting factor in other sectors of life, for example civic engagement and flexibility in personal advancement. Finnish language skills are seen to be most pertinent for the economic integration of those not fluent in English, who do not have a higher or professional education or who otherwise have difficulty finding sufficient employment. Participants however describe difficulties finding opportunities to use what they have learned in practice due to social or economic circumstances and the role of English in communication. Informants’ experiences of language switch with Finnish speakers are seen as a discouraging barrier to practice and indicative of opposing language planning for internationalisation and integration. Further language planning for access to instruction and practice is seen to be advisable particularly for immigrants immersed in primarily English-speaking environments.