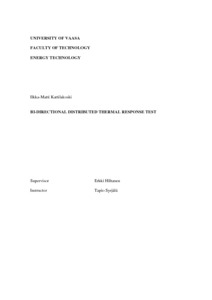 The research problem is to perform a bi-directional distributed thermal response test (DTRT) and to describe what is occurring. With bi-directional is meant a heating and cooling test. Those, in addition to distributed temperature sensing (DTS) are useful for collecting information on groundwater flow in and around a borehole heat exchanger (BHE). An estimate on convective heat transfer is important if the bedrock is to be used as a heat store.
The thermal response test (TRT) procedure was described, along with some of its history. Additionally, heat pump-, borehole heat storage- and DTS technologies were elucidated.
A heating and cooling test with DTS was executed successfully. Subject of the experiment was a 122-meter deep BHE in Gerby, Vaasa.
The undisturbed ground temperature was determined by circulating the heat carrier fluid without heating. It was measured with Pt-100 sensors and DTS. The measured values were slightly higher during daytime and settled back in the evening. Calculated borehole thermal resistance was around the range typical of water-filled BHEs. It seemed to fluctuate over time to some extent, which was probably due to power quality variations.
No anomalies were found in the temperature distribution. Calculated effective thermal conductivity however suggests the presence of a groundwater flow. Ground layer atop the rock was significantly affected by outdoor temperature. The most probable explanation was that the rock was not fractured and horizontal groundwater flow was limited to the thin ground layer. The test was the first of its kind and its results shall remain as reference for future experiments.