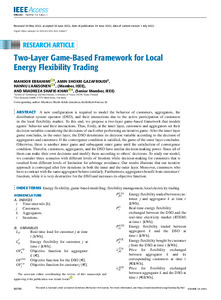 vertaisarvioitu
©2022 Authors. Published by IEEE. This work is licensed under a Creative Commons Attribution 4.0 License. For more information, see https://creativecommons.org/licenses/by/4.0/

A new configuration is required to model the behavior of customers, aggregators, the distribution system operator (DSO), and their interactions due to the active participation of customers in the local flexibility market. To this end, we propose a two-layer game-based framework that models agents’ behavior and their interactions. Thus, firstly, at the inner layer, customers and aggregators set their decision variables considering the decisions of each other performing an iterative game. After the inner layer game concludes, in the outer layer, the DSO determines its decision variable according to the decision of aggregators and customers. If the convergence condition is satisfied, the game of the outer layer concludes. Otherwise, there is another inner game and subsequent outer game until the satisfaction of convergence condition. Therefor, customers, aggregators, and the DSO have similar decision-making power. Since all of them can make their own decisions and modify them according to others’ decisions. To study our model, we consider three scenarios with different levels of freedom while decision-making for customers that is resulted from different levels of limitation for arbitrage avoidance. Our results illustrate that our iterative approach is converged after few iterations in both the inner and the outer layer. Moreover, customers who have a contract with the same aggregator behave similarly. Furthermore, aggregators benefit from customers’ freedom, while it is very destructive for the DSO and increases its objective function.