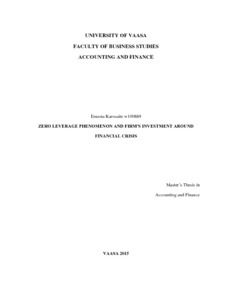 This thesis investigates the zero-leverage phenomenon and its relationship with investment before, during and after the latest financial crisis. The data used in this study contains industrial firms from USA. Financial and utility firms are omitted from the sample. The whole sample includes 992 firms. Sample period captures the years from 2003 to 2012 and is divided into three sub periods: pre crisis, crisis and post crisis. The first period contains years 2003-2006, the second 2007-2009 and the third 2010-2013.

Logistic model is used in order to test zero-leverage phenomenon around financial crisis. For analysis the traditional firm variables are used. For relationship between zero-leverage and investment fixed effects panel estimation with OLS estimator for variable coefficients is employed in order to execute empirical tests. This relationship is analysed using Tobin’s Q investment model.

Results for this study present that zero-levered firms in USA around financial crisis are financially constrained. They pay high taxes and achieve tax deduction from non-debt sources. Coefficients from pay-out dummy variable and pay-out ratio identify that there is one type of zero-levered firm. However, the significance of pay-out ratio is not consistent in various logistic regression models. Additionally, the zero-levered firms are riskier and tend to use more equity. And based by previous year’s zero-leverage decision dummy variable, these firms are consistent, they maintain their decision to follow zero-leverage policies.