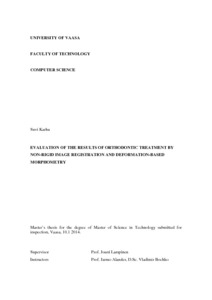 The goal of this research was to find out, whether the non-rigid registration of dental casts can be used in the evaluation of orthodontic treatment and to develop a program, which would at least partially automatize the evaluation process of images. The aim was also to experiment the evaluation of three-dimensional models of the casts. This research was delimited to cover only the evaluation of malocclusions within the dental arch. The relationships between the dental arches were not considered. This thesis was done in the University of Vaasa at the Department of Electrical Engineering and Energy Technology as a part of the HammasSkanneri research project, whose aim is to automatize the digitization and archiving of dental casts.

This research used two-dimensional images of dental casts which were taken of orthodontically treated patients before and after orthodontic treatment. Non-rigid registration was performed by using a registration tool of Fiji software. The evaluation of the accuracy of the registration was performed by measuring distances between manually inserted landmarks, and by comparing the linear and angular parameters of the registered images and the original target images. The displacements of the teeth were approximated with the help of deformation-based morphometry.

The accuracy of registration is within reasonable error limits, if the image is taken straight from above of the cast and the registration is performed with the help of landmarks inserted by a human. Estimation of the changes showed that the movement of teeth can be coarsely measured by using deformation-based morphometry based on change estimates that resemble the Jacobian estimates. A set of programs, which partially automatize the evaluation of the accuracy and the changes, were developed. Three-dimensional imaging of the casts was unsuccessful, and thus the development of 3D evaluation system was left as a future research topic.