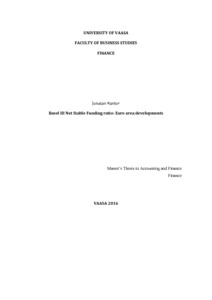 In this thesis The Net Stable Funding Ratio (NSFR) levels for Euro-Area countries are investigated. NSFR is a part of Basel III Liquidity framework, which aims to promote more sustainable funding structure in relation to their assets and off-balance sheet activities. This area of banking regulation is highly debated but specific studies about the subject are limited. This study uses methods from a study conducted by King 2013 in estimating the NSFR but develops them further for additional accuracy. NSFR levels are calculated using the original 2010 specification as well as the new 2014 specifications. The sample for the study includes 2836 banks from 18 countries and the data consists from income statements and balance sheet items gathered from Bankscope and ECB Statistical Data Warehouse for end of 2014.

The results show that the weighted average country level NSFR with 2010 specification falls below the minimum requirement of 1,00 with an average of 0,974. The variability between countries is high from 0,65 for Greece to 1,299 for Italy. Eight countries out of 18 are below the minimum requirement, which indicates that there is still lot of work to be done in this area for the sample countries. For the 2014 specification the average NSFR level increases to 1,026. The variability is still large from 0,69 for Greece to 1,37 for Italy. There are still seven countries below the minimum requirement for the new specification. This shows that the new specifications are not that demanding to banks but there is still lot of changes to balance sheets of banks that have to be implemented. These changes could have significant affects to bank profitability and net interest margin. Additionally the results show that the concentration of funding and assets play an integral role in NSFR levels.

Results give new information about the development of NSFR levels in the Euro-Area and particularly it looks at country specific NSFR levels. Findings show high variation between countries in NSFR levels and that although the area is geographically and financially integrated, for NSFR the differences are significant.