Culture and consumer response on advertising; Comparison of Finnish and Italian consumers 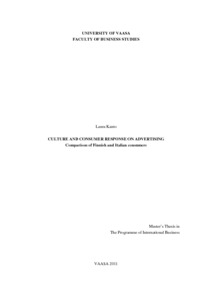 This study takes a look at consumer response on advertising. More importantly it focuses on how culture affects the way consumers respond to advertising. Culture’s effect is studied through advertising standardization and adaptation.

The theoretical part of the study presents theories on international advertising from the point of view of standardization and adaptation, and takes a look at the meaning-based models of consumer response. Based on theory, a framework is developed which presents the interaction between the consumer and the advertisement. Cultural theories from Hofstede, Schwartz and GLOBE are presented in order to identify the different dimensions of national culture. Based on the discussion a framework is again presented, and Finnish and Italian cultures are described. The theoretical frameworks of international advertising and national culture form the basis of the empirical part of the study. The study is qualitative in its nature and focus groups are used as the main source of data. The empirical part of the study looks at the consumer responses from two different cultures, Finnish and Italian. Two focus group interviews are organized, one for each culture. Television commercials are shown to the participants and the commercials are discussed in groups. Both standardized and adapted commercials are shown in order to see the differences in responses.