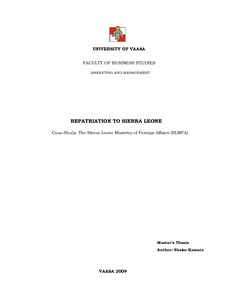 Going abroad for a number of years to live and work in different countries with different cultures can be a major challenge for most people. To manage these challenges and lower the burdens and difficulties associated with repatriation adjustment at home, human resources managers need to be proactive and be responsive to the re-adjustment
problems that affect the lives of repatriates who have return back to their home country. Organizations and companies do not only underestimate the colossal burden to repatriation adjustment, but they also fail to acknowledge the difficulties that repatriates face when they have return back to their home country after working and completing international assignment abroad. Research shows that only a fraction of companies have invested substantially in managing and creating an effective repatriation process even though the repatriation process is considered to be more challenging than expatriation.

The challenges faced by repatriates who returned back to SLMFA in Sierra Leone include: lack of current credentials or education, inability to re-establish the network that the repatriates were once part of at SLMFA before the overseas assignment, strong competition from younger and very ambitious employees some of whom have been employed by SLMFA in Sierra Leone while the repatriates were stationed abroad, changes in SLMFA’s management, experience of culture shock and reverse culture shock, changes in lifestyle due to economic hardship, and struggling to adjust to the hot summer seasons in Sierra Leone.

Most of the returning staff for this study did not have positive experience with repatriation. The study found that the repatriates were delighted when they were leaving for the overseas assignment, and majority feel disappointed about their final return to Sierra Leone. The study reveal differences in the way cultural changes impact the 5 repatriates after their return. Repatriates who served in the West seem to be agitated about the cultural transformation that has taken place in Sierra Leone after their return. Repatriates who served in Africa and Asia also experience some form of cultural transformation after their return, but were not so concern like their counterpart who have served in the West. The study found various forms of coping methods including few peculiar ones that the repatriates adopted during adjustment. The study reveal most of the coping strategies occur while the repatriates were out from their working place, and only few coping strategies were mention in relation to their working place. In relation to repatriation assistance, the study shows only few repatriates receive post-return assistance after the overseas assignment. The study reveal that the employees receive more support for expatriation than repatriation.

This study will begin by reviewing the relevant literatures in this field of study. Further, other core issues related to repatriation will be presented. The approach used in this study is qualitative single-case approach which was carried out through semi-structured interviews of nine repatriates who are currently working for SLMFA in Sierra Leone. The general finding in this current study reveals that repatriation is colossal burden for all the returnees who took part in this study despite the gain made by only few of the repatriates. It also reveals that repatriation adjustment is as demanding if not difficult than the original expatriation adjustment that was experienced by the repatriates when they first step their feet on a foreign soil abroad. The study found that most of the interviewees did not have meaningful experience to share about repatriation, and it seems only few of the staff were satisfied with the job that SLMFA had offered them after the return.