Death and the Plague in The Story of Wanderings 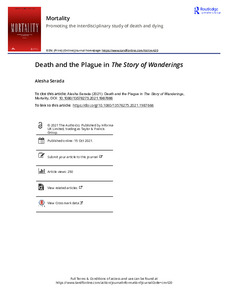 vertaisarvioitu
© 2021 The Author(s). Published by Informa UK Limited, trading as Taylor & Francis Group. This is an Open Access article distributed under the terms of the Creative Commons Attribution-NonCommercial-NoDerivatives License (http://creativecommons.org/licenses/by-nc-nd/4.0/), which permits non-commercial re-use, distribution, and reproduction in any medium, provided the original work is properly cited, and is not altered, transformed, or built upon in any way.

Little known beyond the Russian speaking world, The Story of Wanderings is a dark fantasy film produced in the late period of the Soviet cinema. The film was classified as a children’s film by the director, film critics, and the state. Produced by Mosfilm, the third oldest and the most influential film studio in Soviet Russia, it is a rare example of Soviet children’s horror, featuring several death scenes and a personified plague. Death’s presence in The Story of Wanderings stands in contrast to idealised Soviet pioneers self-sacrificing themselves for the good of others, by presenting a world of flawed characters stymied by the ambient ever-presence of death. In post-Soviet Russian-speaking territories, the film is understood critically as a masterfully constructed ‘adult’ horror disguised as a state-sponsored family film. This article examines the way Alexander Mitta’s film serves a ‘dual audience’ in the context of a socialist ‘cultural industry’ that lacked an established horror genre. It also highlights how the contradictions of late Socialism are revealed in the specific power dynamics between the adult and child characters of the film.