How Finland copes with an ageing population : adjusting structures and equalising the financial capabilities of local governments 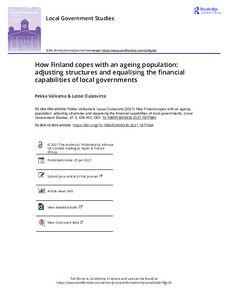 vertaisarvioitu
© 2021 The Author(s). Published by Informa UK Limited, trading as Taylor & Francis Group. This is an Open Access article distributed under the terms of the Creative Commons Attribution License (http:// creativecommons.org/licenses/by/4.0/), which permits unrestricted use, distribution, and reproduction in any medium, provided the original work is properly cited.

The study focuses on the challenges of the ageing population in Finnish public policies related to municipal structures and finances. First, we review how the impacts of the ageing population have been identified and how necessary policy responses and reforms of the municipal division in particular have been prioritised by recent central governments. Second, we evaluate how state grant policy has equalised the financial capabilities ofmunicipalities to cope with the financial consequences of the ageing population. Our findings indicate that ageing is believed to increase municipal expenditures because the demand for care services in particular is growing. The analysis also demonstrates that the state grant system is capable of substantially equalising the differences in tax bases and spending obligations between municipalities. Nevertheless, central governments have planned ‘big-bang reform proposals’, introducing a completely new tier of democratic government and regionalising the most burdensome welfare services of municipalities.