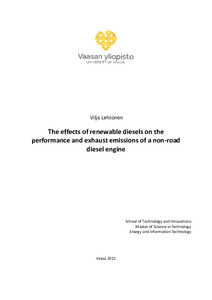 Diesel engines are popular because of their high efficiency, durability, reliability and low-operating costs. However, they still may pollute the environment despite of good qualities of liquid fuels. Nitrogen oxides and particulate matter emissions are the most critical emissions from diesel engines.

The aim of this thesis was to examine the effects of renewable diesels and renewable diesel blend on the performance and emissions of a non-road diesel engine. Two renewable wood-based diesel fuels and one renewable diesel fuel blend were studied in a non-road engine. Fossil diesel fuel was used as the reference fuel. The test engine was a turbocharged, intercooled non-road diesel engine which had a common rail fuel injection system and no exhaust aftertreatment system. Nitrogen oxides, carbon monoxide, hydrocarbons, carbon dioxide and particle number emissions were measured in laboratory conditions. The measurements were conducted using the load points of the eight-mode non-road test cycle of the ISO 8178 standard.

In terms of nitrogen oxides, carbon monoxide, hydrocarbons and particle number, reductions were detected with both renewable fuels and the fuel blend compared to fossil diesel fuel over the test cycle. The highest reductions were in particulate emission, between 10–26%. Carbon monoxide emissions reduced by 2–9% and hydrocarbon emissions by 6–12%. In terms of nitrogen oxides, the highest reduction was 9% but otherwise reductions were quite low. Reasons for detected reductions in emissions were probably due to the high cetane number, low viscosity, low distillation range and low sulphur and aromatic content of renewable diesels and blend.