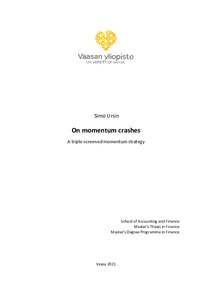 Momentum anomaly, an idea that past returns can predict near-future returns, remains one of the most persistent and puzzling features of the financial markets. Using a strategy that goes long in past winner stocks and short in past losers is widely confirmed to generate abnormal risk-adjusted returns across time, different markets and asset classes. Literature has documented that this effect exists both when implemented based on relative performance of stocks in a stock universe (cross-sectional momentum) as well as based on a stock’s absolute performance alone (time series momentum), though the academics are more inconclusive of the latter. Despite the anomalous performance, momentum strategies may be subject to severe losses, called momentum crashes. These crashes occur as a result of outperforming past losers relative to winners, in periods when markets rebound after declining in bear markets.

Using a comprehensive set of individual stocks in the European stock markets over the period from January 1992 through December 2019, this thesis examines the profitability of the standalone cross-sectional momentum, time series momentum and a dual momentum strategy that combines elements from the two strategies. More importantly, inspired by recent literature, this study proposes a new triple-screened momentum strategy that augments the dual momentum strategy with a market screening step. Cross-comparisons are conducted in order to investigate whether such strategy outperforms its counterparts particularly from the standpoint of avoiding momentum crashes.