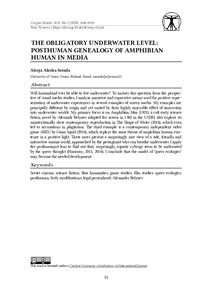 vertaisarvioitu
© 2021 The Author(s). Published in the Corpus mundi journal. This work is licensed under a Creative Commons Attribution 4.0 International.

Will humankind ever be able to live underwater? To answer this question from the perspective of visual media studies, I analyze narrative and expressive means used for positive representation of underwater experiences in several examples of screen media. My examples are principally different by origin and yet united by their highly enjoyable effect of immersion into underwater worlds. My primary focus is on Amphibian Man (1928), a cult early science fiction novel by Alexandr Belyaev adapted for screen in 1962 in the USSR.I also explore its unintentionally close contemporary reproduction in The Shape of Water (2016), which even led to accusations in plagiarism. The third example is a contemporary independent video game ABZU by Giant Squid (2016), which replays the same theme of amphibian human existence in a positive light. These cases present a surprisingly rare view of a safe, friendly and interactive marine world, approached by the protagonist who can breathe underwater. I apply the posthumanist lens to find out that, surprisingly, aquatic cyborgs seem to be underrated by the queer thought (Haraway, 2015, 2016); I conclude that the model of ‘queer ecologies’ may become the needed development.