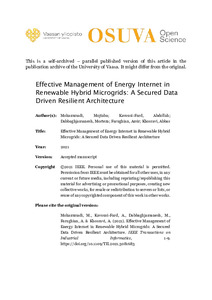 vertaisarvioitu
©2021 IEEE. Personal use of this material is permitted. Permission from IEEE must be obtained for all other uses, in any current or future media, including reprinting/republishing this material for advertising or promotional purposes, creating new collective works, for resale or redistribution to servers or lists, or reuse of any copyrighted component of this work in other works.

This paper proposes a two-layer in-depth secured management architecture for the optimal operation of energy internet in hybrid microgrids considering wind turbines, photovoltaics, fuel cell unit, and microturbines. In the physical layer of the proposed architecture, the operation of the grid is formulated as a single objective problem that is solved using teacher learning-based optimization (TLBO). Regarding the cyber layer of the proposed architecture, a two-level intrusion detection system (IDS) is proposed to detect various cyber-attacks (i.e. Sybil attacks, spoofing attacks, false data injection attacks) on wireless-based advanced metering infrastructures. The sequential probability ratio testing (SPRT) approach is utilized in both levels of the proposed IDS to detect cyber-attacks based on a sequence of anomalies rather than only one piece of evidence. The feasibility and performance of the proposed architecture are examined on IEEE 33-bus test system and the results are provided for both islanded and grid-connected operation modes.