Contributions to Mathematics and Statistics : Essays in honor of Seppo Hassi 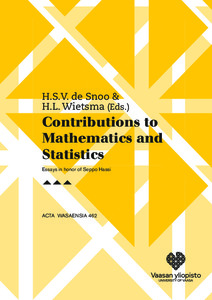 This Festschrift contains thirteen articles in honor of the sixtieth birthday of Professor Seppo Hassi (University of Vaasa). It centers on three topics: functional analysis and operator theory, boundary value problems, and statistics, stochastics, and the history of mathematics.

The collection contains four papers on the topic of functional analysis and operator theory. More precisely, it includes a paper treating the transformation of operator-valued Nevanlinna functions and the congruence of their associated realizing operators, a paper treating Parseval frames in the setting of Krein spaces, a paper treating algebraic inclusions of relations as well as the generalized inverses of relations, and a paper treating Krein-von Neumann and Friedrichs extensions by means of energy spaces.

Boundary value problems are considered in six of the contributions. In particular, singular perturbations of the Dirac operator are treated by means of the technique of boundary triplets, the connection between sectorial Schrödinger L-systems and certain classes of Weyl-Titchmarsh functions is considered, PT-symmetric Hamiltonians are treated from the perspective of couplings of dual pairs, the Riesz basis property of indefinite Sturm-Liouville problems is considered, the stability properties of spectral characteristics of boundary value problems are investigated, and the completeness and minimality of systems of eigenfunctions and associated functions of ordinary differential operators are treated.

Finally, the collection also contains three contributions connected with the topics of statistics, stochastics, and the history of mathematics. More precisely, a new statistic is introduced for the testing of cumulative abnormal returns in the case of partially overlapping event windows, a new characterization of Brownian motion is established, and, finally, a history of (the department of) mathematics and statistics at the University of Vaasa is presented.