Board Gender Diversity and the Underpricing and Long-Run Performance of Initial Public Offerings : Evidence from Finland 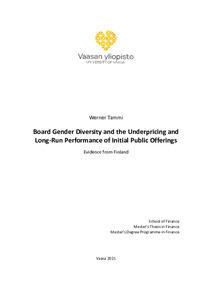 Initial Public Offering (IPO) is a process where a private company wants to get publicly listed and sells its stocks to the public for the first time. IPOs have attracted many finance professionals,
such as researchers and investors, during the last few decades. The attraction towards IPOs has
been focusing on both, long- and short-run performances of IPOs. The purpose of this thesis was to study whether board gender diversity affects the Finnish IPO performance. Both short-term and long-term performances of the IPOs were examined. The first empirically motivated hypothesis stated that the greater female board presence reduces the underpricing of the IPO. The second hypothesis was about the long-term performance, claiming that IPOs with greater female board presence outperform the IPOs with lower female board presence in a one-year period. The data sample consisted of 45 IPOs that were divided into two groups, depending on whether the companies had women sitting on the board during the listing process or not. All
IPOs in the sample occurred between 2013 and 2018 in the Nasdaq Helsinki. The short-run performance was examined with 1st-day market-adjusted returns. The long-term performance was studied with 12-month returns, using market- and risk-adjusted methods. In a market-adjusted framework, results were calculated using data with 1st-day returns included and excluded. The risk factors considered in the empirical part were size and beta. OMX Helsinki Cap was used as the market benchmark, and 3-month Euribor was used as a risk-free rate. Regarding the first hypothesis, the results show that even though the mean and median underpricing was somewhat smaller for IPOs with a diverse board, the connection found was only a weak tendency. There is no statistical significance in the difference. However, the empirical studies revealed that Finnish markets' underpricing had impaired quite largely during the last decades. While observing the long-term performance, the IPOs with gender-diverse boards earned higher and even statistically significant alphas compared to its counterpart. However, the difference between the groups is relatively small, meaning that there is no statistical significance. Interestingly, the Finnish IPOs from the sample performed quite much better than expected from the previous studies, meaning that the long-term performance was better than expected. Even though the hypotheses needed to be rejected due to the lack of statistical evidence, this thesis offers excellent value for upcoming studies and of the historical performance of Finnish IPOs.