Characterization and modelling of Lithium-ion Batteries for Grid Applications 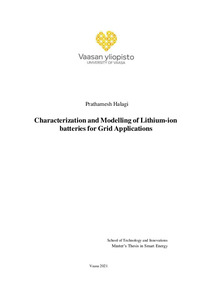 The demand for energy has been increasing, raising concerns about greenhouse gases and depleting renewable energy sources. This has made the use of renewable energy sources more evident in various applications. These renewable energy sources are recognized for their potential to reduce global warming and climate change. The use of smart grids will help in the reduction of these GHS’s and CO2 emissions. These grid applications necessitate energy storage systems in order to achieve smooth operation. Thus, Energy storage systems have become an essential technology for various applications such as land-based grid applications and Lithium- ion batteries will play a significant role.
Lithium-ion batteries have seen considerable development in the last couple of decades to enhance battery characteristics based on its safety, voltage/current capacities, operating temperatures, ageing, etc. Similarly, Lithium titanate oxide (LTO) battery cells have seen significant development as it is regarded to play a vital role in energy storage systems for large scale stationary grid applications. These batteries use LTO as active anode material instead of the traditional graphite. LTO batteries are recognised for various competencies ranging from higher safety margins, high thermal stability, low self-discharge rate and superior cycle performance. LTO batteries are relatively new, and the behaviour and characteristics of this battery are unfamiliar. Thus, the thesis purpose is to study and understand the state-of-art LTO battery cell behaviour under controlled situations.
LTO batteries require accurate battery models at different operating conditions due to its non- linear behaviour. Thus, extensive experimental characterization tests were developed to study the behaviour of the LTO battery to determine the dynamic behaviour of the LTO battery cell. The proposed model is suitable for various applications as well as for the development of Energy Management Systems (EMS) and Battery Management Systems (BMS). Hence, hybrid pulse power characterisation (HPPC) tests were developed and applied to a 2.9 Ah LTO battery cell. A second-order equivalent circuit (ECM) model is developed based on the experimental characterisation tests conducted at different SOC’s (0 % - 100% at 10% interval) and operating temperatures (15°C, 25°C, 35°C and 45°C). The results of HPPC tests will be utilised for the parametrisation of the ECM. The ECM variables were incorporated into SOC estimation using the Coulomb counting (CC) method. The simulations model was developed in Simscape Matlab/Simulink software and were compared with experimental measurements for ECM validation.