Potential Impacts of Electric Aviation in the Kvarken Region : Stakeholder views in 2020 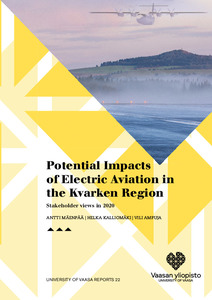 The aim of this interim report is to share the results from a survey that was conducted as part of the Interreg Bothnia Atlantica project named Finding innovations to Accelerate Implementation of electric Regional aviation (FAIR). FAIR is developing a methodology to support early and efficient commercialisation of electric-powered regional flights in the Kvarken region, which consists of the counties of Ostrobothnia, Southern Ostrobothnia and Central Ostrobothnia in Finland and the county of Västerbotten and municipality of Örnsköldsvik in Sweden.

The objective of the survey was to provide a background understanding concerning stakeholders’ and experts’ views on the potential regional effects of electric aviation (EA) in the Kvarken region. The online survey targeted experts and various project stakeholders and was opened during 16.-30.11.2020. The response rate was 24.8 %. The survey was one of the first activities in the project, and the questions arising from it will subsequently be considered within the FAIR network.

According to the results, the regional effects of EA are manifold and challenging to foresee. EA is generally viewed as a new and exciting opportunity and way for increasing collaboration in the Kvarken region. However, it should be noted that experts and stakeholder views are probably quite positive compared to those of the general public. Stakeholders definitely considered EA as a positive opportunity but understood that regulations and financing establish important preconditions for early implementation, which need to be considered carefully.

The inclusion and utilisation of new networks, ideas and skills related to the implementation of EA will certainly affect existing networks and working methods. New collaboration opportunities are likely to emerge, and there will probably be new opportunities for existing industries in the Kvarken region, such as energy technology companies, as some of their products may become important in the EA industry. The Kvarken region may also benefit from general interest, which arises from EA and an increase in accessibility. Altogether, implementation of EA is considered a promising, and natural step in the region’s path towards specialising in environmentally friendly technology and solutions.