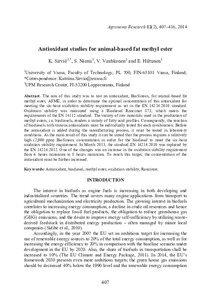 vertaisarvioitu
© 2014 The Authors. This is an open access journal distributed under the Creative Commons Attribution-NonCommercial-NoDerivatives 4.0 International (CC BY-NC-ND 4.0) licence https://creativecommons.org/licenses/by-nc-nd/4.0/

The aim of this study was to test an antioxidant, BioSineox, for animal-based fat methyl ester, AFME, in order to determine the optimal concentration of this antioxidant for meeting the six-hour oxidation stability requirement as set in the EN 14214:2010 standard. Oxidation stability was measured using a Biodiesel Rancimat 873, which meets the requirements of the EN 14112 standard. The variety of raw materials used in the production of methyl esters, i.e. biodiesels, renders a variety of fatty acid profiles. Consequently, the reaction of biodiesels with various antioxidants must be individually tested for each combination. Before the antioxidant is added during the manufacturing process, it must be tested in laboratory conditions. As the main result of this study it can be stated that the process requires a relatively high (2,000 ppm) BioSineox concentration in order for the biodiesel to meet the six-hour oxidation stability requirement. In March 2013, the standard EN 14214:2010 was replaced by the EN 14214:2012. One of the changes was an increase in the oxidation stability requirement from 6 hours minimum to 8 hours minimum. To reach this target, the concentration of the antioxidant must be further increased.