Dynamics of the capital base and funding structure of banks around the global financial crisis. Evidence from the US and European banks. 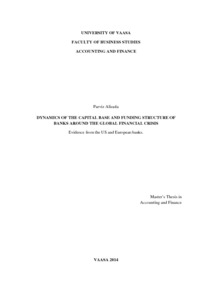 This thesis investigates the dynamics of bank capital base and funding structure before, during and after the latest financial crisis. The data used in this study contains banks from the US, UK and 26 European countries: Austria, Belgium, Cyprus, Czech Republic, Denmark, Estonia, Finland, France, Germany, Greece, Hungary, Iceland, Ireland, Italy, Latvia, Lithuania, Luxembourg, Malta, Netherlands, Norway, Poland, Portugal, Romania, Slovakia, Slovenia, Spain, Sweden and Switzerland. The whole sample includes 6927 individual banks from these countries. Sample period captures the years from 2004 to 2012 and is divided into three sub periods: pre crisis, crisis and post crisis. The first period contains years 2004-2006, the second 2007-2009 and the third 2010-2012. Fixed effects panel estimation with OLS estimator for variable coefficients is employed in order to execute empirical tests.

According to the empirical findings banks tend to increase their capital under good economic conditions. Raising capital is not costly during economic expansion as suggested by theories and previous empirical research. On the other hand during crises and post crisis periods raising capital becomes costly process. Therefore, the coefficient of GDP growth becomes negative in post crisis time. Other findings suggest that bank size, short-term funding and interest rates have a negative impact on the capital ratio in all times. Net income and non-interest income have a positive impact on the capital ratio. Loan loss reserves also have a positive impact on the capital ratio; however it is significant only under good economic conditions, i.e. during the first sub period. The findings suggest that long-term funding has been affected by the crisis more. Because of rising uncertainty banks were unable to receive much long-term funding. The results show that Scandinavian countries suffered less from the crisis. These countries were able to maintain sufficient capital ratio during the crisis. Main limitations of this study are the studied geographical area and applied methodology. More advanced method such as GMM estimation can be applied in further studies.