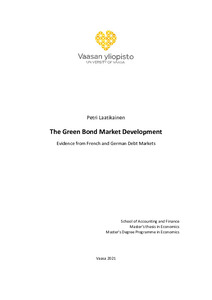 A green bond is a relatively new debt instrument where the proceeds are allocated to environmentally friendly projects. The aim of this thesis is to examine French and German primary and secondary green bond markets starting from their inception. More precisely, this study investigates if investors in both markets earn lower yields for green bonds compared to bonds without the green label. Prior green bond research has focused on the pricing differences between green and conventional bonds; thus, this thesis adds to that literature by comparing French and German markets.

The primary market analysis finds a negative insignificant green bond premium for both countries. For French green bonds, the analysis finds -12 bps negative issue yield whereas for German green bonds the issue yield is -5.6 bps. However, based on the primary market results, the study does not find enough evidence that green bonds are traded at lower yields compared to conventional bonds. The secondary market analysis reveals a statistically insignificant green bond premia for both countries. On average, French green bonds trade at -0.42 bps lower yields com-pared to their comparable conventional bonds. The analysis finds a positive green bond premium for German green bonds. On average, the green bonds trade at 3.8 bps higher yields than comparable conventional peers. The subsample analysis shows that bonds issued by sovereign entities and bonds with Aa1 rating have a positive effect on the premium in German markets. Further research about the factors that might have an effect on the estimated premium reveals that none of the chosen characteristics could explain the premium.