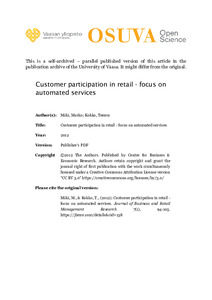 vertaisarvioitu
©2012 The Authors. Published by Centre for Business & Economic Research. Authors retain copyright and grant the journal right of first publication with the work simultaneously licensed under a Creative Commons Attribution License version "CC BY 3.0" https://creativecommons.org/licenses/by/3.0/ (this allows others to share the work with an acknowledgement of the work's authorship and the place of first publication)

Self-service technologies in retail have not been studied on a large scale despite their increasing importance. The major aim of this article is to increase our understanding of automated processes in retail by employing an in-depth analysis of one case. The object of study is a fully automated food shop in Western Finland,in a small village. After a brief review of customer participation and self-service technologies in general, the object of study is analyzed by means of a survey. A total of 82 persons (= 27.3 % of the village population) took part in the survey. The findings indicate that the automated concept has great relevance for the customers. Customers were committed to the service concept and the general perception of quality is rather high. Lack of personal service is not generally perceived as an issue, but according to this study, age seems to have a weak impact on the customers’ perceived difficulty of use of the vending machines. Managerially it has become clear that traditional retail research does not provide sufficient information for automated stores. In terms of further research, a study on automated stores in urban surroundings and an in-depth analysis of the ways of communication between vending machines and customers are suggested.