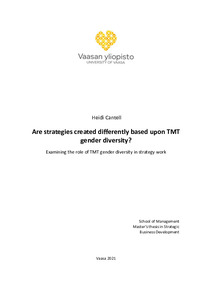 This thesis explores the role of top management team (TMT) gender diversity in firm’s strategy creation and strategy work. The aim is to explore whether differences exist between different managerial groups in this context. The study is conducted by using a multiple-case research design.

As a result, although cases had many similarities, few differences existed. First, each case described themselves differently from each other by using different adjectives. Slightly more subtle adjectives were used by women compared to men’s more decisive word choices. Second, the differences existed in the participation of personnel in the strategy creation. The findings show that the participation was emphasized the most in the case representing gender diverse TMT in which personnel was strongly engaged with the strategy creation. Findings also indicate that decision-making in homogeneous TMTs, which consists of either men or women stood out more agile compared to diverse case. All cases stood out with their collective way of making decisions. Last, findings also pointed out that all cases utilized many different sources of data for strategic decision-making, emphasizing financial means. In addition, TMTs consisting mostly of women pointed out also the support of feelings and personal beliefs in decision-making.