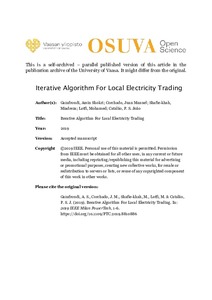 vertaisarvioitu
©2019 IEEE. Personal use of this material is permitted. Permission from IEEE must be obtained for all other uses, in any current or future media, including reprinting/republishing this material for advertising or promotional purposes, creating new collective works, for resale or redistribution to servers or lists, or reuse of any copyrighted component of this work in other works.

Distribution networks are more active due to demand response programs which causes flexible behavior of end-users. This paper proposes an iterative algorithm to transact electricity based on interplay between aggregators and the Distribution Company (DisCo) considering the amount which the bottom-layer of a distribution system can provide from the aggregated end-users. The performance of the proposed trading algorithm was tested on a 33-bus test system for a distribution network. Similations for different scenarios were made to analyze the impact of different flexibility constraints on sustainability of the system and expected cost on distribution grid's player.