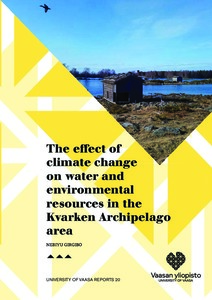 The reduction of carbon dioxide emissions is a choice that all should follow to combat climate change. Climate change causes problems such as global warming and meetings on these problems conclude that nations must integrate the Kyoto protocol commitments along with a reduction in greenhouse gases. The purpose of this study is to investigate the effect of climate change on water and environmental resources for the Kvarken Archipelago area. In the region, the sea level rise and river water runoff increase cause flooding and erosion. Measures such as dams and wetlands have to be installed for controlling these effects. Moreover, the use of renewable energy to replace non-renewable energy sources is one-step forward to combatting climate change. ‘Demonstrative energy’ is an important way of showing the usage of renewable energy. The Merten Talo or Havets Hus which is a part of the archipelago and Nature 2000 area will be a research site for the University of Vaasa. Paradoxically, climate change effects could even be used to our advantage, where for example, warm water could be used as a heat source, offering benefit to all sides by combatting and adapting to climate change. A microclimate is a set of meteorological parameters that characterize a localized area. The microclimates found in the Merten Talo area could be used as a tool to study climate change effects. The other area addressed was the land uplift. Land uplift is faster than the sea level inclination in the site, and in the Vaasa region, land uplift is on average 8.77±0.30 mm/yr. All in all, promoting sustainability and adapting to the effects of climate change is important, not only generally, but for the area in particular.