Bank Lending and Credit Creation around the Financial crisis 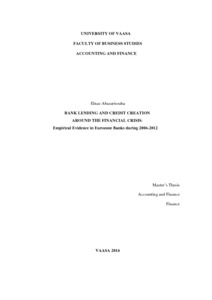 This study examines the relationship between each asset type and the changes in amount of lending and credit creation before, during and after the financial crisis 2007-2009 in Euro zone banks. The data are gathered from the Bankscope database and contains 354 banks from 19 Euro zone countries. This study uses fixed effect panel regressions to investigate the impact of different types of assets on lending ability of banks during the financial crisis 2007-2009.