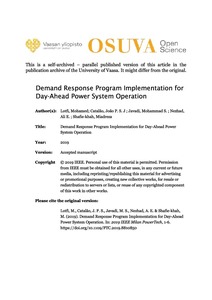 vertaisarvioitu
© 2019 IEEE. Personal use of this material is permitted. Permission from IEEE must be obtained for all other uses, in any current or future media, including reprinting/republishing this material for advertising or promotional purposes, creating new collective works, for resale or redistribution to servers or lists, or reuse of any copyrighted component of this work in other works.

This paper demonstrates day-ahead operation of power systems in the presence of a Demand Response Program (DRP) for serving exact amounts of demanded energy over the operational horizon. The proposed two-stage model features a here-and-now framework for shaping the aggregated demands during operation. First, the day-ahead scheduling problem is solved by adopting Unit Commitment (UC) to determine the generation level of power generation units as well as the Locational Marginal Prices (LMPs). Afterwards, the obtained LMPs are considered as the Time of Use (ToU) for the second step of the scheduling and reshaping the demanded loads of each aggregator. A new methodology is provided in this paper to estimate the reaction of consumers behavior in terms of encouraging their participation in DRPs. Unlike classical models which adopt load reduction over the operational horizon, this model ensures that the total demanded loads will be served. Therefore, the total supplied energy for the operational period before and after DRP implementation remains unchanged. Meanwhile, the total payment of consumers will be considerably reduced by adopting this strategy. The simulation results on the 6-bus test system clarify that the proposed model can reduce the total operational cost as well as smoothen the load profile and nodal prices over the operational horizon.