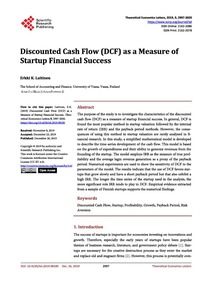 vertaisarvioitu
© 2019 by author(s) and Scientific Research Publishing Inc. This work is licensed under the Creative Commons Attribution International License (CC BY 4.0). http://creativecommons.org/licenses/by/4.0/

The purpose of the study is to investigate the characteristics of the discounted cash flow (DCF) as a measure of startup financial success. In general, DCF is found the most popular method in startup valuation followed by the internal rate of return (IRR) and the payback period methods. However, the consequences of using this method in startup valuation are rarely analyzed in financial research. In this study, a simplified mathematical model is developed to describe the time-series development of the cash flow. This model is based on the growth of expenditures and their ability to generate revenues from the founding of the startup. The model employs IRR as the measure of true profitability and the average lagin revenue generation as a proxy of the payback period. Numerical experiments are used to show the sensitivity of DCF to the parameters of the model. The results indicate that the use of DCF favors startups that grow slowly and have a short payback period but that also exhibit a high IRR. The longer the time series of the startup used in the analysis, the more significant role IRR tends to play in DCF. Empirical evidence extracted from a sample of Finnish startups supports the numerical findings.