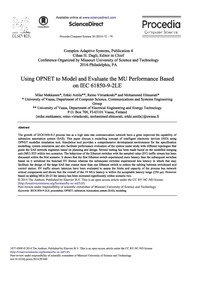 vertaisarvioitu
© 2014 The Authors. Published by Elsevier B.V. This is an open access article under the CC BY-NC-ND license (http://creativecommons.org/licenses/by-nc-nd/3.0/)

The growth of IEC61850-9-2 process bus as a high data rate communication network have a great improved the capability of substation automation system (SAS). This paper discuss a modelling concept of intelligent electronic devices (IED) using OPNET modeller simulation tool. Simulation tool provides a comprehensive development environment for the specification modelling, system simulation and also facilitate performance evaluation of the system under study with different topologies that guide the SAS network engineers based on planning and design. Several testing has been made based on the modelled merging unit (MU) IED within two scenarios. The behaviour of the Ethernet switches with the sampled value (SV) traffic stream has been discussed within the first scenario. It shows that the first Ethernet switch experienced more latency than the subsequent switches based on it serialized the bunched SV frames whereas the subsequent switches experienced less latency in which that may facilitate the design of the large SAS that consist more than one Ethernet switch to reduce the cabling between switch yard and control station. SV traffic stream latencies have been evaluated to assess the limits and capacity of the process bus network critical components and shows that the overall of the 19 MUs latency is within the acceptable latency range (250 μs). However based on adding MUs 20-23 the latency has been increased significantly within scenario two.