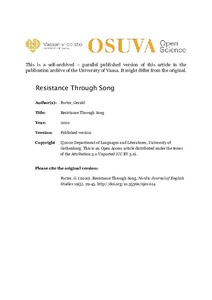 vertaisarvioitu
©2020 Department of Languages and Literatures, University of Gothenburg. This is an Open Access article distributed under the terms of the Attribution 3.0 Unported (CC BY 3.0).

Concentrating primarily on the so-called ‘Navvies,’ this paper interprets the songs of metal workers among casual labourers in nineteenth and twentieth century Britain as an expression of shared values and aspirations. The term ‘Navigators’ or ‘Navvies’ was first used of Irish refugees of Celtic origin, though some were of ‘English settlement’ origin, who came to Scotland and England in the 19th century to take part in manual work. This study focuses first on songs which concentrated on working conditions, and later discusses songs (which have usually been neglected) in which the workplace features more than one singer. The last part of the study examines a Scottish demonstration and march to London in the 1980s when metal workers resisted the planned closure of their rolling mill with a ‘sung’ march to London that echoes the resistance of the early Navvies and others. In an article in Imagined States (2001), written in collaboration with the present writer, Reimund Kvideland made a study of ‘rallar(e)’ (navvies) in Norway and Sweden between 1880 and 1930. He wrote, ‘the railway navvies constructed a new genre of narrative song and employed it to give voice to a unique and positive occupational worldview […] This occupational group created a compensatory and imagined state in which inverted and opposing values prevailed.’ This process is what I aim to investigate in relation to the material described above.