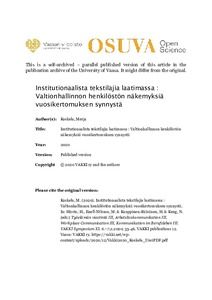 The Finnish government reports of the results of state-owned enterprises annually to the Parliament. During the years 2007 to 2016 this was done in an independent report, while starting from 2017, the report on state ownership steering has been an annex to the government annual report. This specific type of report represents the established genre of annual report, but differs from it in many ways. The main difference is the context of public administration, which makes the report a place of negotiation for economic and political discourse. The aim of this article is to analyze how the practitioners producing the annual report of government ownership steering see the report and its production process as a part of the institutional practices of state administration. Drawing from genre theory, the article asks how the aim of the report is described, how the target group is defined, and what types of activities and roles of actors lie behind the process. In this way, a description of the foundations of an institutional genre and its mechanisms of change is produced. The data of the study consist of three thematic interviews with key actors involved in the process of producing the report. A content analysis was carried out in the data, and the results indicate that competing goals and varying target groups are identified for the genre. Moreover, it is evident that the change in genre status still steers the production process of the report two years after the change, which indicates that the stability of institutional genres resides in the processes and practices of the institutions in question.