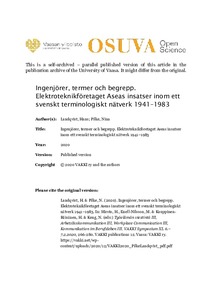 In this paper, we study how Allmänna Svenska Elektriska Aktiebolaget – Asea has participated in and influenced terminology work coordinated by the national terminology centre, Swedish Centre for Technical Terminology – TNC, in Sweden during 1941–1983. The aim of this paper is to shed light on the development of Swedish (technical) terminology based on networking and experts’ efforts. Based on archive material, we analyze who have been the active “Asea experts”, in what ways they were involved in the development processes and what effects their efforts had on the term recommendations given by TNC. The archive material consists of written documents relating to the work process developed by John Wennerberg, who led TNC between 1941 and 1957. The process was carried out in the form of 373 formal survey letters representing 16 subject fields, with both TNC and external parties participating. Our results show that the 52 “Asea experts” play a visible role in the processes by 408 received survey letters within all 16 subject fields. The high response rate, 89.5 %, reveal the experts’ involvement in the process and their high esteem of TNC´s work. The analysis of the comprehensive survey letter R198 shows that Wennerberg has considered the experts’ answers regarding terms (selection, linguistic form, acceptance/discourage) and definitions when he has published TNC’s recommendations. Our study shows that networking and experts representing the corporate sector have been an inseparable part of the development of Swedish (technical) terminology during several decades.