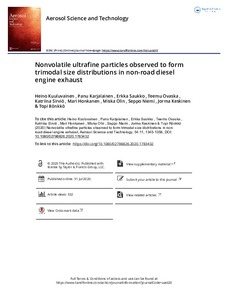 vertaisarvioitu
© 2020 The Author(s). Published by Informa UK Limited, trading as Taylor & Francis Group. This is an Open Access article distributed under the terms of the Creative Commons Attribution-NonCommercial-NoDerivatives License (http://creativecommons.org/licenses/by-nc-nd/4.0/), which permits non-commercial re-use, distribution, and reproduction in any medium, provided the original work is properly cited, and is not altered, transformed, or built upon in any way.

Some recent findings regarding the negative health effects of particulate matter increase the relevance of the detailed characteristics of particulate emissions from different sources and especially the nonvolatile fraction of particles. In this study, the nonvolatile fraction of ultrafine particulate emissions from a non-road diesel engine was studied. The measurements were carried out in an engine laboratory and the exhaust sample was taken from the engine-out location with various steady state driving modes. Four different fuels, including fossil fuel, soybean methyl ester (SME), rapeseed methyl ester (RME), and renewable paraffinic diesel (RPD), were used. In the sampling system, the sample was diluted and led through a thermodenuder removing the volatile fraction of particles. The measured particle size distributions of nonvolatile particles were found to be trimodal. Based on the size distribution data as well as the morphology and elemental composition of particles in transmission electron microscopy (TEM) samples, we were able to draw conclusions from the most probable origin of the different particle modes, and the modes were named accordingly. From larger to smaller in particle size, the modes were a soot mode, lubricating oil originated core (LC) mode, and a fuel originated core (FC) mode. All of these three modes were detected with every driving mode, but differences were seen, for example, between different fuels. In addition, a trade-off was observed in the concentrations of the LC mode and the soot mode as a function of the engine torque.