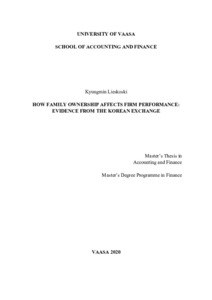 The main purpose of this study is to find out if family ownership of firms has any effect on firm performance. And if there is an effect, to see if it leads to a positive or negative impact on the performance of a firm. A large share of firms is controlled by families worldwide. Korea is well known as a country that has a high percentage of family-owned firms. South Korea also has special ownership structures for firms, including the large conglomerates known as Chaebol, of which most are family-owned. As previous studies of Korean firms tend to focus on the Chaebols, this study instead focuses on smaller firms listed on the Korean Exchange.

Data is collected for 307 non-financial companies that were continuously listed on the KOSPI SmallCap index during the years 2013-2017, giving 5 years of balanced data. The measures used to assess firm performance were both a market measure (Tobin’s Q) and accounting measures (ROE and two measures of ROA).