Sharing Economy – a Modern Phenomenon: The Emergence of Electric Scooters 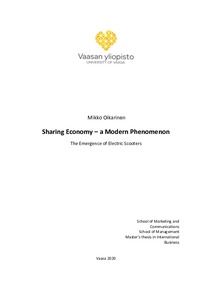 Sharing economy has rapidly come into today’s society. Although the concept of sharing is not new per se, the modern form of the sharing economy has only recently emerged. The main idea in the sharing economy is buying an access to use resources instead of owning them—it enables a more efficient use of the existing resources. Sharing economy has two primary business models: peer-to-peer and business-to-peer. As known services, such as Airbnb, are based on the former, the latter includes the popular shared mobility service, electric scooters. This form of mobility has been integrated in the landscape of major cities in Finland, initially in the capital Helsinki.

Given that the electric scooters have been present in news outlets due to the injuries related to their use, and also the variety of public opinions for and against, it is a relevant topic to conduct research on. The main purpose of the research is both to explore the earlier literature and create an appropriate framework to reflect the empirical research upon but also to investigate who participates in the sharing economy by using the electric scooters and why.

The methodological choice for the empirical research was to perform a qualitative study by interviewing eight people living in Helsinki to gain insight on their general perceptions of the sharing economy, and also to clarify what are the most common motives and deterrents for the use the of electric scooters. On a general level, the most relevant categories were given for both motives (economic, social, convenience, environmental) and deterrents (trust, efficacy, social, sustainability) in the general context of sharing economy. Consequently, the results of the interviews were mirrored to those categories.

The empirical results indicate that the interviewees perceive the concept of the sharing economy similarly—the fundamental purpose is positive, and the goal to use resources more effectively is welcomed. More specifically, users of the electric scooters mostly value the following attributes: they are a good alternative to public transportation, they save time, they are convenient, and they are widely available. In addition, the most common motives and deterrents are aligned with the main categories as for the sharing economy in general. Subsequently, the most frequently mentioned categories for the motives were convenience and environmental, whereas the most frequently mentioned categories for deterrents were trust
and sustainability.