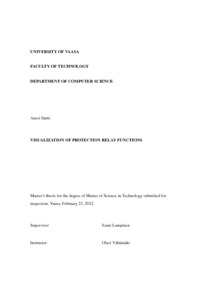 Protection relays are part of electricity generation and transfer networks, which help the network to deal with faults. Modern protection relays have tens of protection functions, which in turn each have tens of setting parameters. It is very important for the functionality of the system to select for the right parameters, but on the other hand it is also very difficult as the relations between the parameters can nonlinear and difficult to understand. A graph would often make it easier to design the setting parameters.
The objective of this work was to constructively show that it is possible to develop for a protection relay setting tool a new feature which visualizes the functionality of protection functions. The purpose of those features was to improve the user interface on the protection relay setting tool and thus ease the setting of the relays. For achieving the objective, an interface was developed, which allows for developing addons for the protection
relay setting tool. The interface was the utilized for generating a graph for distance protection. An applied version of a waterfall software development processes was used. The result of this work was a program which implements the previously mentioned functionalities. The usability of the program was ensured by using an iterative prototyping process, where prototypes of the user interface were produced and then given to experts for testing. The experts gave feedback about the program, the feedback was used to create new prototypes and the cycle was repeated until the program was satisfactory. Normal software testing methods were also used to design and conduct on the program and its various parts.
The developed software is primarily designed for creating graphs related to distance protection functions, but the developed system can be easily extended to cover the creation of other types of protection function graphs. The software developed in this work was primarily designed to work in conjunction with the software of the company which commissioned the work, but the principles and methods developed here could be applied to other manufacturers’ devices.