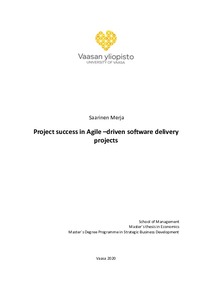 Agile project methodology is adopted by large in software industry all over the world. The methodology is based on Agile Manifesto that was announced by a group of software devel-opers in 2001. Since then, a number of Agile methodologies and methods including their own processes, were created. Along Agile, the concept of project success changed from project management success to project success, latter highlighting especially client satisfaction. The purpose of this study was to clarify what are the perceptions on project success in the Agile –driven commercial software delivery projects, examined from client´s and supplier´s perspec-tive, and whether those expectations are fulfilled. The backbone of the study was the Agile research in which the concepts of project success, success factors and risks were presented. Based on study findings, the project success is perceived differently by project stakeholders, depending on the role of the stakeholder and his/her level of understanding Agile. The per-ceptions are different not only between the stakeholders but inside the client and supplier organizations themselves. The study proposes that the project methodology as well as objec-tives of the projects are discussed with the actual project stakeholders already during the contract phase so that both sides can commit and have joint understanding of the goals be-fore the actual project starts. The study also recommends that the outcomes are measured against the agreed objectives upon project completion.