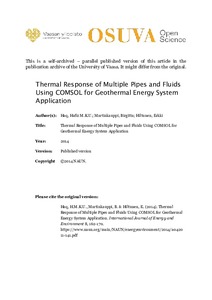 A geothermal system is modeled using COMSOL. The purpose is to study and evaluate the thermal response of the pipes and the fluids. The model is designed for a low energy network. A part of this network is used to collect energy from a sediment layer under water body. This model depicts a heating system in the low energy shallow network which brings out the thermal response and helps implementing an efficient geothermal system application. This model executes in COMSOL on a special pipe dedicated as a heat collector for the heating system, to study the heat transfer within the pipes and the fluids used as a heat carrier. It also presents the thermal response of multiple fluids and compares the simulated and the measured data of the actual working fluid within the system. The temperature distribution and the heat flux along the length of the pipe are also taken into account in multiple pipes.