Strategic Alliances as a form of Coopetition and its impact on the Performance of Airlines: A Case Study analysis of Lufthansa, Finnair, and Alitalia 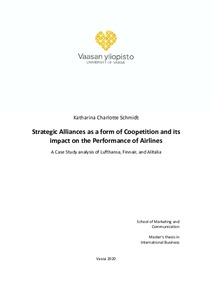 The research on coopetition (i.e., simultaneous cooperation and competition) has increased significantly over the last two decades. Noteworthy findings have been made, including the benefits that a firm gains from such a relationship. However, only limited studies centralize the impact on performance through coopetition. Existing studies on coopetition and the effect on performance show mixed outcomes, and researchers claim that the results depend on the firm's industry. Thus, it is relevant to analyze the impact of coopetition on market performance. The following study will examine the aforementioned research gap by looking into the airline industry where coopetition relationship has been practiced in the form of strategic alliances for more than 20 years. The empirical analysis was based on a multiple case study of three airlines, from three different countries, operating in three different alliances. That allowed to investigate similarities and differences among the diverse sized companies in terms of the performance impact. Primary data were collected through semi-structured interviews. Additionally, annual reports were used as secondary data and to enhance credibility through triangulation. Findings show that in general, coopetition through strategic alliances contributes positively to airlines. Nevertheless, the degree of how much airlines benefit from alliances depends on the position in the network and the airline's size. Airlines of small size gain most from the relationship, and airlines with a central position in the alliance give more to the strategic alliances than they get out. The findings reveal that airlines of large size gain less from alliances and increasingly form other types of partnerships like joint ventures that create a more balanced give and gain relationship. Notwithstanding, the COVID epidemic will have a crucial impact on airlines and increase the importance of strategic alliances and partnerships further.