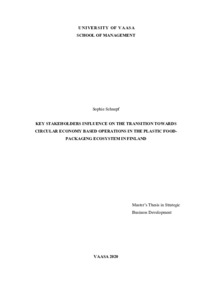 The current issues of resource scarcity and rising consumption show the need to move towards a circular economy (CE) where resources are kept alive and valuable as long as possible by closing material loops and changing the way we operate. Plastic food-packaging especially has an inefficient resource usage due to the short lifecycle, difficulties in recycling and a higher risk of leakages. A shift from a take-make-dispose logic towards a circular material flow requires involvement from all stakeholders affecting or being affected by each other. It needs common goals and circular principles which steer stakeholders’ operations. There is a research gap for understanding stakeholder’s role, interest and influence on CE-based operations.

This study follows an explorative research design as it aims is to get a better understand of stakeholders’ roles, interest and influence. Further, it seeks new insights for the strategic actions needed for the Finnish plastic-food packaging ecosystem to move towards circular economy-based operations. In order to study the phenomena, the theoretical base of a stakeholder analysis has been utilized. The empirical analysis was conducted in the Finnish plastic food-packaging ecosystem as a single case study and six sample companies as embedded cases have been interviewed via qualitative methods by using semi-structured interviews.

The findings classify the stakeholders in the ecosystem according to the influence and interest model and indicate three classes of stakeholders being of importance for the transition: Key players, subjects and context setters. The government and the retailer companies have been identified as key players with strong influence to drive the transition forward. Furthermore, the findings unfold several challenges to overcome for a successful ecosystem transition to CE-based operations and suggest how the stakeholders can take influence on those.