Understanding the Emerging Fourth Sector and Its Governance Implications 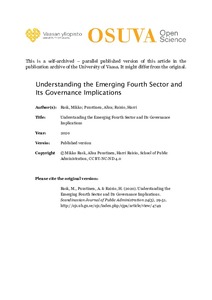 The fourth sector has traditionally been described as encompassing families, households, neighbours, and friends, however, competing definitions have recently begun to emerge. Three different strands can be observed in the fourth-sector literature. The first strand centres on the notion of one-to-one aid. The second strand centres on self-organizing civic activism. The third strand focuses on hybrid organizations. In this paper we will analyse the main commonalities and differences in the understanding of the fourth sector. Our conclusion is that despite differences, there is enough ‘family resemblance’ between the three different streams of fourth-sector discussion to warrant a synthetic reflection of the governance issues related to this novel phenomenon. As a result of that analysis, we distinguish five specific governance issues that are related to 1) the ability of the public sector to work upon shared values, 2) the empowering nature of self-organizing, 3) the need for new operational rules under the ‘sharing economy’, 4) the transitory but structuration-oriented nature of fourth-sector processes and 5) the notion that fourth-sector involvement does not necessarily improve the quality of participation.