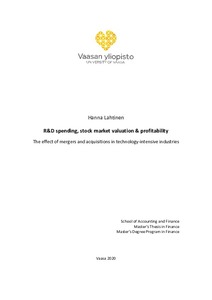 Firms pursue growth internally via research & development activities and externally through mer-gers and acquisitions. There is a trade-off between them, and optimal allocation is crucial to company’s long-term profitability and competitiveness. This study investigates the relationship between mergers & acquisition and research & development. More specifically, the aim is to examine how these strategic decisions affect stock market valuation and long-term profitability of the acquiring firm in technology-driven industries.

The stock market response towards R&D spending is found to be positive after M&As. That indi-cates that investors expect the merger to intensify the R&D activities of the acquiring firm lead-ing to better performance in future. However, the expectations are not always fulfilled since the acquirer’s R&D spending in the year of the M&A is not reflected more strongly in its future profit-ability than in other years. It is also found that the overall R&D spending of the acquirer decreas-es after M&As. These results illustrate the shift from so called scale deals to scope deals, where the mergers are motivated by access to new markets or product lines. It is suggested that due to more complex nature of the scope deals the post-merger integration problems may be pro-nounced.