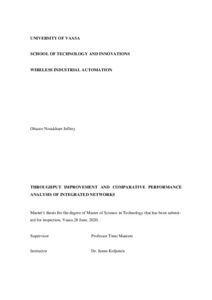 The demand for high-speed communication continue to increase significantly. Industry forecasts have shown that future data services would contribute to rapid growth in data traffic, with most of this traffic primarily indoors and at hotspots locations. Thus, the deployment and integration of small cell base stations (SCBSs) with Wireless Local Area Network (WLAN) or Wi-Fi is viewed as a critical solution to offload traffic, maximize coverage and boost future wireless systems capacity.

This thesis reviews the existing network of WLAN, Long Term Evolution (LTE) and Worldwide Interoperability for Microwave Access (WiMAX). Tight and Loosely coupled integration of these networks is studied.