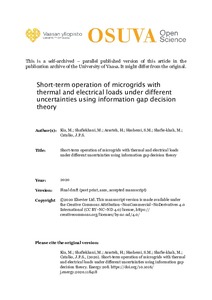 The utilization of an Energy Management System (EMS) for the optimum scheduling of generation units, as well as demand side resources is essential due to the high penetration of Distributed Energy Resources (DERs) in microgrids (MGs), to achieve the desired objectives. As a result of the restructuring of the power systems and increasing the electricity prices during some periods in a day, demand side programs have been highly valuable by electricity customers. In this paper, a Demand Response (DR) model has been proposed to present the behavior of responsive controllable loads in response to the DR calls. Moreover, optimal scheduling of energy resources is developed for a typical MG by considering the presence of both electrical and thermal demands. Combined Heat and Power (CHP) units, boilers, wind turbines, storage devices, demand response resources (DRRs), as well as the power exchange possibility with the upstream wholesale market are the energy resources that have been considered as the portfolio of the decision maker. Furthermore, the uncertainty resources of the wind speeds and electrical load are handled by the Information Gap Decision Theory (IGDT) method. The performance of the proposed framework is comprehensively analyzed on the IEEE 33-bus test system. The advantage of the proposed methodology under the uncertainty conditions is analyzed by the Monte-Carlo simulation method when the different realization of the wind power and electrical load are considered.